This site being pretty much an exclusive Newcastle Utd blog, it takes a lot for me to write about other teams players. However, Chelsea's Number 9 Fernando Torres has struck something in me. He get's endless stick in the media and throughout the land at every football ground he goes to and this needs to stop.

He is currently on a 12 hour goal drought which is remarkable for a man of his talent with the players he plays with. But the reasons behind, in my view, are not that remarkable to be honest. It's actually plainly obvious.


It is quite clear to me El Nino is suffering from some form of depression. He's not depressed, he's got depression. Massive difference.

Basically, it makes you miss an open goal at Old Trafford. It makes you leave Liverpool and join Chelsea ruining the 'legacy' you made there for no real reason. It makes you not be able to score in 12 hours and 19 minutes with players like Mata and Hazard around you.

Can I also just say I am shocked at the level of ignorance at Chelsea football club regarding Fernando Torres. For all their billions, they cant buy common sense. The media and fans alike are just as ignorant to his pain but they don't employ him.

Fernando Torres has been suffering, and I mean suffering in every sense of the word, for at least 2 years now. Being a hugely paid professional football makes no difference whatsoever, it could make it worse if anything. So for all the medical expertise in football with endless expense, are you telling me a man like me sat at home with no medical background whatsoever can see it and they can't?! Whoever 'they' are.

I have gone through something very similar to Torres which resulted in me giving up football altogether after being an unstoppable number 9, to then a shadow of that player in a relatively short space of time. So I probably recognise the signs more than most. 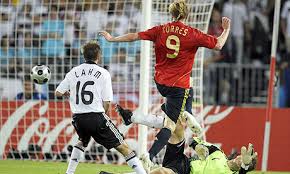 But to be honest what Fernando Torres is going through is obvious!

This is Fernando Torres ladies and gentlemen. He doesn't do 12 hour goal droughts. He scores goals from all angles with only half a chance. Just think about his plight a little more instead of just doing what people LOVE to do and laugh at people's misery.

The boy needs help. Hopefully Rafa Benitez is more than just a coach to him as some things are beyond football.

Depression is a disease. When people mock it and are ignorant to it, it only makes it worse. http://www.mind.org.uk/depression