Steve McClaren Is No Manager. He's Nothing But A Snide, Gutless, Conman

I've been pretty quiet on the blogging front this season with my many other committments but given our clubs plight, I've woken up. As an aspiring coach myself, I was all for Steve McClaren coming in as I thought he would create a well coached team with a sense of purpose and identity. How wrong I was. Steve McClaren may have all the coaching badges and experience in the world however when it comes to being a manager, he is nothing short of a conman. 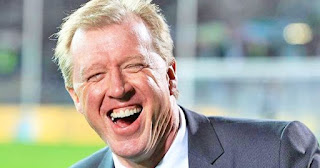 His press conferences and interviews after pathetic performances week after week are staggering. I have never known such lack of standards in all my life. He has stated in 8 out of 10 interviews after every defeat claiming we played well. Now he either believes this nonsense or he is given us all the cheap insurance salesman 'sell' to let us know that 'everything's fine'. Neither wash. Big time.


Only now has he come out after 28 games of a totally forgettable inept season and openly turned on his players. The only reason he is doing this is because the fans have openly turned on him. Talk about gutless. The snide arrogance of the man is impossible to stomach. He comes across as slimy when he is being complimentary so you can only imagine what he is like when he isn't. His smirk complete with ridiculous tuft of hair he insist on having makes you sick.

How he still looks at himself in the mirror and calls himself a Head Coach takes some doing. Perhaps 'Coach' is the key word as even he doesn't have the nerve to call himself a 'Manager'. He doesn't have the balls to take on the responsibility of what being a manger is all about. If he did, we wouldn't be in this position. We would either be higher up in the table or he would have quit by now. Hiding behind thee tag of Head Coach keeps his focus on the training field...not St James Park where it counts.

When things go wrong his solution is to 'sort it out on the training ground'. I'm not saying this
is wrong, as many coaches/managers do this, but these other managers always have the primary focus of fixing the problems for the match day performance. Not just to coach the solution at the training ground and declare 'job done, its fixed'. Not at any point have Newcastle Utd fixed anything on the training pitch for the match day performance as we haven't improved in ANY department of the team. If anything we have been getting worse all season. This latest Bournemouth showing proves it. 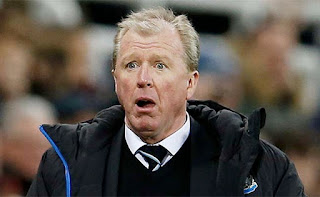 Not at any stage did we look like winning. We don't defend properly, create enough chances or take the few chances we do create. We haven't all season. That's why we are the worst team outside of Aston Villa. Newcastle Utd are in 19th place in the Premier League after 28 games. We have 24 points. We have never been on this situation before in my lifetime. Even when we went down in 2009 we had more points and were hovering outside the bottom three. This season is a shambles.

Now let me repeat my earlier point of the manager, not Head Coach but managers press interviews this season. 8 times out of 10 he has stated we played well. He even said it last week after Stoke. He said after we had one shot on target in the 93rd minute that we showed fight and quality. He even said it after the Bournemouth game we need to get back to the Stoke performance. What is this man on? Is he actually being serious? Does he have any standards as a manager or what?

No self respecting football manager would even dare claim to have been playing well when you're 19th in the league, fail to score a goal week after week after week after week and show no quality whatsoever. He is a nothing but a conman. He has never been a football manager. Especially in the Premier League and even more at a club the size of Newcastle. Some journalist said he has been out of his depth since day one. I can't disagree. He has conned his way in and has been desperate to convince us all to stay. He's failed.

The performances on the pitch and results to go with it say everything you need to know. Even the most clueless gullable human being can look at the league table and realise things aren't 'going well'. This gutless pretender needs to be removed from his position of huge power and replaced with a genuine Manager who takes responsibility for his and his teams actions on the pitch. Coaches coach Monday to Friday, Managers do this but also manage Saturday and Sunday. It's a 7 day a week job. Something McClaren doesn't have the stomach for. 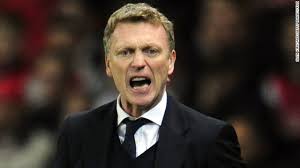 He can go back to coaching, working with the FA, putting on coaching master classes, speaking to
young up and coming coaches all day long. I have no problem with that. Steve McClaren can teach me a coaching session or two no problem and I will be in his awe. However when it comes to managing a team, no thanks. I think I run my u12s better then he ever could and that is a scary thought considering he has my dream job.

Who to come in next is another question but I would take Benitez, Rodgers or even Moyes to give these lot a kick up the a**e and the true leadership they need. I really don't care which one as long as it's one of them, anyone else would be underwhelming and may not have the impact required. One thing is for sure, McClaren the pretender needs to go. Now.

We have a week till our next game at Leicester. We all know we will be turned over with this current regime so why pretend any longer?