Some blame him for the last minute equaliser that cost United 2 points against an awful Aston Villa team. Which is a series of questionable display by the new Newcastle No.1. In such some have had no problem tweeting their views towards him, which has resulted in him having enough and removing himself from social media. 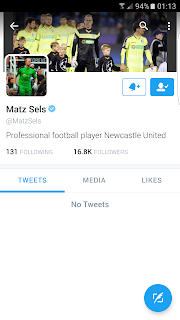 Newcastle keeper Matz Selz has reportedly deleted his Twitter account due to the amount of criticism from Newcastle fans after the Aston Villa game.

I've got to say the criticism he has recieved has been way too harsh and over the top. Of all the players to blame for the dropped two points last night, Matz Sels shouldn't be at the top of everyone's list. Even Nufc.com pointed the finger at the Belgian keeper before mentioning the woeful finishing of Dwight Gayle and Mo Diame.

These two were the biggest reason why we failed to win at Villa park, throwing away some of the best chances we will make all season. Gayle, through one on one, lacked any compsure to recognise how much time he had to do what ever he wanted and fired straight at the Villa keeper. Diame somehow missed from 6 yards with the entire goal in front of him. Shocking the lair of them.

I hope Matz Sels confidence hasn't been totally destroyed by fans on Twitter and elsewhere as at the end of the day, we need him. Whether Darlow should be first choice or not, Sels is a new player and shouldn't be made to feel like he can't look at his Twitter account anymore.

Lots of fans have already tweeted how sorry they are for criticising him but the damage is already done...he won't see any apologies now.