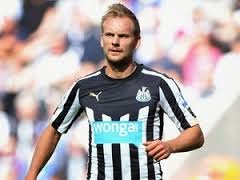 De Jong is back in full training and scoring in behind closed doors games. Question is when he is fully fit and available where is he going to play? Moussa Sissoko (assuming he's still here) has made the No.10 role his own this season and shoving him anywhere else on the pitch would be a step backwards. Most people would slot De Jong in the No.10 role and then shove Sissoko out wide or into central midfield. I don't agree.

Sissoko can not play centre midfield to save his life. Not because he can't get forward and do some damage from this position but because he can't defend. At all. He has no awareness of players around him and doesn't break his back to help out the defence like he does to get forward. The amount of times opposition midfielders just waltz past him into our box is embarrassing. We lost to the mackems because Sissoko was slipped back into centre midfield and it cost us big time.

He lost the ball in the centre of pitch, had no sense of bringing the player down for a professional foul to prevent the counter attack and then may as well had been invisible with the total lack of picking men up when he ran all the way back into our area. Just watch the Johnson goal again just focussing on Sissoko. Horrendous. He also has shown not to be the same player once put out wide on the right this season. He just doesn't have the same impact as driving through the middle like a wrecking ball. 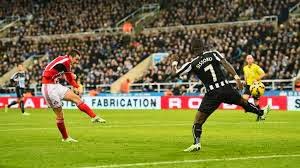 So if Sissoko must stay in the No.10 role, where is De Jong gonna play? He isn't a disciplined central
midfield player, similar to Sissoko, so playing him there would cause more damage then good. He isn't a winger or even a wide forward designed to cut in to attack at goal. We have better players in this position like Perez, Sammy, Aarons and Obertan when they are fit. So the only logical thing we should do as a club is mould Siem De Jong into an centre foward. Here's why:

He's a finisher. He has proven over the years at Ajax that he know's where the back of the net is. That's why we bought him. People say he is a Cabaye type replacement, he isn't. He is more Kevin Nolan than he is Yohan Cabaye. Coming in from deep to score. There are no worries that given a chance he would stick it away more often then not.

He can hold the ball up. He is decent on the ball and if played up to him, you would expect it to stick. He offers this better than Cisse who can have no touch whatsoever on some days and Ayoze Perez is just too lightweight to play up front on his own. He's a battler and likes to run in behind defences, not chest the ball down with a big lump of a centre back up his arse.

He's good in the air. De Jong can head it, very well. He has scored his fair share of headers and gives us this threat in the box for any crosses that come into the area. Something Perez doesn't and Cisse isn't exactly Les Ferdinand when he get's up there. I think I only remember Cisse scoring a couple of headers since he has been here. De Jong will attack any ball in the box and hang there like Shearer. 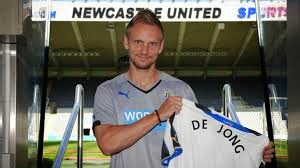 Fact is we don't have many reliable strikers at the club and we won't be signing any in January, so
moulding De Jong would, in the words of Alan Pardew, be like a brand new signing. Centre forwards are hard to come by and are expensive. Even when we do go out and sign one it might not work like it hasn't with Riviere. De Jong is one of a few top class players we have in our squad and if we were to be able to play him up front whilst keeping Sissoko in his best position, then have the likes of Perez and Aarons around them, this excites me.

That could be an attacking line-up to give any team a run for there money. We always have the option of Cisse making his late sub appearance to add to that and others like Obertan and Sammy to mix things up. Our season is pretty much over. 4 more wins would see us safe so unless we have a meltdown of results and get dragged into a relegation fight, John Carver could show off his coaching abilities and have a go with De Jong up front. What exactly do we have to lose?

End of day...he can't be any worse than his brother!