John Carver Will Be In Charge For Rest Of The Season

Lots of speculation, polls & rumours are flying around as to who will take over from the up, down and sometimes total debacle Alan Pardew 4 year reign, however don't expect Mike Ashley to bring someone in soon. In fact, don't expect Ashley to bring in any of the names that are topping the polls and surveys you will read either. Just look at the type of man Ashley hires at Newcastle Utd. He only hires who he knows or at least meets in a casino... 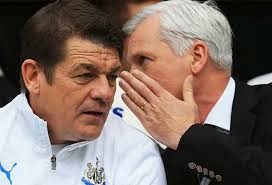 John Carver and the rest of the motley crew are set to take charge for the next two games against
Burnley and the FA Cup tie versus Leicester and unless we suffer awful defeats in both ties, I fully expect Ashley to keep Carver on as Interim manager for a number of reasons. a) There isn't many people Ashley knows left in football to come in and do the job that haven't already been here, b) Pardew leaving isn't his choice and has no desire to change things dramatically and c) Just doing nothing and leaving it as it is seems the easiest and gutless thing to do.

Ashley has his eyes set on Rangers in the near future and his time on Tyneside will be nothing but a distraction until someone comes in a buys it off him. Why he would go the process of hiring a new manager along with his backroom staff, then oversee player recruitment doesn't exactly seem like a very realistic scenario at this moment in time. Ashley had his perfect puppet in place and backed no matter how many people he headbutts or verbally abuses or how many humiliating Tyne/Wear derby defeats or how many games we lose in a row or lose in a calendar year...he was his Pinocchio and was uninterested in any real boy.

John Carver will carry on the Pardew job and the fact he is a Geordie will come into play with the Ashley logic as a 'pro' when it comes in for judgement and possible criticism. Plus it isn't like Carver will turn the job down will he? He will lap it up and dance to any tune Ashley plays just like he has at the side of Pardew for the past 4 years. This is a man who verbally abused Newcastle fans during a pre-match warm up with no hint of regret or shame afterwards. He is a Newcastle fan yes, but this comes after being a Newcastle employee. If he has to carry on the Pardew puppetry...he will. Happily.

I for one am glad Pardew is gone. Regular readers of this blog over the past few years will be in no doubt about that. However, this isn't the perfect scenario it may have seemed when it first came to light. We are actually being paid compensation to have Alan Pardew's face removed as the representative of our football club to the world which is a Xmas present to remember for a long time but given the fact Mike Ashley is the man responsible in replacing that face is a big worry. If their were an outstanding candidate available Ash would 'trust' then we would be in dreamland. I can't see one though so we are in limbo instead. 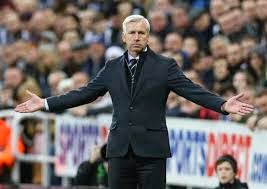 I may be wrong and Ashley could surprise us all by bringing in a big name or highly respected coach
to take over the club and back him to take it forward but I don't think I will be. He couldn't be bothered nor was interested in replacing Pardew for the past insanely poor two years so just because Pardew has left doesn't automatically mean he has to. Carver will be more than willing to make the step up from Assistant manager just like Chris Hughton was when Ashley lost interest after relegation and tried to sell the club. He just left the bloke that was here to get on with it and I fear this will be the same situation.

I have the strong feeling Ashley and his merrymen don't really know what to do so will just do nothing. Any kind of form from Carver and co will see them see out the season where fresh candidates may emerge in the summer. Not very exciting but I would much rather have that happen then panic and give the job to Steve Bruce!

Just like to say a few home truths about Alan Pardew as he takes his journey back down south to hopefully never return with the inevitable relegation of his new tiny club. You're laughable excuses, outrageous behavior, baffling player selections/substitutions, horrendous cup record and humiliating Tyne/Wear derby record are a disgrace to our football club. For any decent period of time we have had under your management has been totally destroyed by your unbelievable incompetence.