Newcastle Have Signed A New No.7 And He Will Be A Revelation

The transfer window is slammed firmly shut and Newcastle Utd have themselves a new no.7. The old one was packaged and shipped off for a ridiculous over the top fee, with a new signing set to wear number 7 shirt and he couldn't be any more different to the one that's just left. 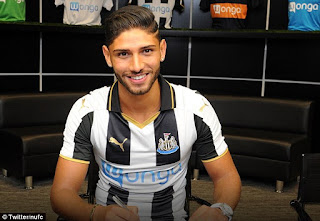 New Moroccan left back, come left winger, Achraf Lazaar is quick, skillful and full of enthusiam. Something Moussa Sissoko desperately lacked. Lazaar is also brave. This lad wont hide and wait to see if the game looks like its one he might be able to influence. He will take every game by the scruff of the neck and try to make an impact, everytime.

Lazaar will make mistakes, no doubt. However, give me a player who tries and makes mistakes then one that doesn't try and pretends to be interested. He is all left foot and will look to overlap whoever is playing left wing as much as possible, especially at home, to deliver into the box as well as look to score himself. He may even play left wing himself given how attacking he is. I cant wait to see him in a black and white shirt.

To match we have brought in a new right back to replace the despicable Daryl Janmaat in the shape of ex-mackem DeAndre Yedlin. Again he will be quick, skillful and full of enthusiam. He will also look to get forward as much as possible. The two of them could find themselves as the most forward players on the pitch and crossing to each other this season so holding midfielder Hayden will have a job to do dropping back. Saying that he likes to get forward too!

This team, or should I say completely new team as Benitez has brought in 12 new first team players, is one full of attacking threat from all over the pitch. The full backs will fly forward, the centre midfielders will drive forward and Ritchie will look to win games on his own from the right hand side. We have 4 strikers to choose from. If Rafa stick with 4-2-3-1 he will have a task in picking which one compliments the team the most. Nice problem to have. Visit the William Hill page for the football specials bets including player, manager, team and international ones.

We were all out heavy favourites to win the league before a ball was kicked, as short as 7/4 with some bookmakers, which is ridiculous given how tough the Championship is and no one really knows how a team will shape up after relegation. The first two games made a mockery of those odds as we lost to Fulham and Huddersfield. Three back to back wins has now eased the nerves with fans and players I'm sure. Then there's Rafa. 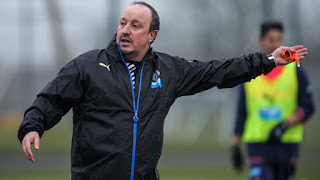 Speaking of Rafa, what a man. He is already the most popular and respected manager we have had
since Sir Bobby due to his clear understanding of the club and most of all the common sense he has shown. He knows how big this club is and can be so treats it as such. He knows the fans aren't total mugs so he treats them as such. It isn't that hard of a job to have it's just others over the past 12 years have made a pigs ear of it. Mainly down to my first point. They just didn't understand or 'get' what Newcastle Utd is. Rafa does.

Even now you hear 'experts' like Graeme Souness completely spew tired lazy cliches at Sky Sports viewers about how the fans are a drain on the club with too high expectations. Pure nonsense. You hear Big Sam preach how Newcastle think they're a big club but they simply aren't. We think we're as big as we are, nothing more. Why would we? With all the trophies we've won? These men have both managed Newcastle (unsuccessfully) since Sir Bob and even many years later prove they never got it and still don't get it. Idiots pair of 'em.

If you ask 10 fans to pick there current best XI you might get a few that exactly match but most wont. This is due to the squads depth. It isn't just healthy with numbers, its healthy with talent. We genuinely have 2 men for each position, sometimes 3, and it wont effect the team massively. Its one of the most fascinating squads we have had for a number of years. The fact we are in the Championship says a lot to the work Rafa and Charnley have done.

The league wont be a walk in the park just because we have the players and manager in place, if only football was that easy, but we must surely be able rack up the points to finish in the top two at least given the standard of opposition, Brighton were flying and we put them to sword quite comfortably. If that's the opposition, i'll take it. 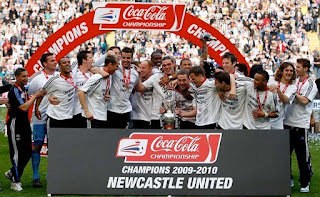 Saying this we have tough fixture coming up on paper with Derby away, Norwich, Aston Villa and QPR away so if we can get through these games with a healthy amount of points and not more than the one loss, we will kick on this year i'm sure and boss the league. As well as the cups don't forget. A 25 man first team squad gives you options with the cup games we haven't had for years so watch this space for a decent cup run.

Things are looking rosy atm and I'm happy with the signings we have made, none more so then our new no.7. I've got a feeling he is gonna be the shining light out of all of them...just my instinct.