If you have read any of my articles in the past then you will know my feelings about Pardew and his tripe excuses after games. Whether we play well or not. But what he has said after the Swansea defeat is beyond any pathetic excuse, its blatant lies.

Finally, somebody in the post match press conference asked Pardew why he wasn't playing the popular 4-3-3 system that worked so well last season. Contributing to a 6 game winning streak. This is what he genuinely said;

"We played 4-3-3. We were 4-3-3. Sammy was on the left hand side and supported Demba, I thought he did a good job"  (Quote can be read in both articles here shieldsgazette chroniclelive)

This is incredible. I have listened to Pardew make up complete non facts to cover his own failings but this is something else. This is just 100% blatant lies. Who is he trying to kid? Does he have any level of respect for followers of this football club whatsoever? There is no way on God's green earth was Sammy Ameobi playing on the left of a 4-3-3. He hardly went anywhere near the left hand touchline. But never mind Sammy, the easiest to way to prove this is total bollox is in the shape of Shane Ferguson on the pitch. So if Sammy was playing left wing, where was Shane Ferguson playing? Centre midfield? No. He was on the left wing trying his best to try and deliver some decent delivery into the box for a change.

However, for arguments sake, lets say we were playing 4-3-3. Lets says Pardew is actually telling the truth. Then the obvious question to ask is, what the hell are you doing playing Shane Ferguson in the middle of the park? When we have Bigirimana and Marveaux sat on the bench. Is Shane Ferguson now suddenly more capable as a centre midfielder than these two? Not to anyone else's knowledge with a basic, functioning brain who has watched NUFC for more than 5 minutes this season. Its absolute nonsense. Here is a graphic of the average players positions v Swansea provided by NUFC_Stats:

Quite clearly Shane Ferguson No 31 is in the left wing role. Its as clear as day. Sammy No.28 is playing off Demba, albeit mainly from the left side of the pitch. But any notion that this is the 4-3-3 we want and expect is total make believe. Just look at the two, that right just two, centre midfielders positions. One in front of the other in a clear 2 man central midfield set up, in a 4-4-1-1 formation which WE ALL saw on Saturday.

What makes me absolutely livid is the fact that Alan Pardew gets away with this nonsense. I feel like I am the only one who notices it sometimes. If their are two things I cant stomach it's irrelevant excuses and blatant lies. Alan Pardew has a masters degree in both. Just look at some of the examples below. These are not made up they are totally true:

After not bringing on Ben Arfa against Swansea last season in a 0-0 draw at home, Pardew explained this with, "I didn't bring him on because it wasn't the right game for him. We needed someone to create space and find gaps." What? So Ben Arfa isn't the perfect player to create this space or gaps? I see. Makes sense.

This season at Reading new signing Anita wasn't in the team and failed to come off the bench. Pardew explained with this, "I didn't feel it was the right atmosphere for him. This was like a Championship game atmosphere". What Pardew did do though was bring on rookies James Tavernier and Gael Bigirimana in positions Anita can play. Anita sat on the bench throughout. So why was he even on the bench if you were never going to use him under any circumstance? Again, makes perfect sense. Explain.

Let's bring this right into the present day. After we lost v Swansea on Saturday Alan Pardew has really gone to town with the excuses. Here are the two best ones:

"I thought we lacked experience. The reason we lost is because they had more experience than us" Oh ok then. It was a lack of experience that cost us? So is that why you brought on 19 year old Bigirimana when we were already 1-0 down for a 25 year old? Explain. 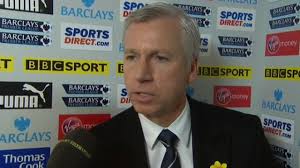 "It was a blow to the players (Cisse being unavailable). There is no other way I could dress it up, but they tried to cope as best they could with it." This one is a cracker. What is he even trying to talk about here? What difference does it make to the players who are actually playing whether Cisse was in the team or not? Player's get on with their own job and are glad to be in the team themselves. Not one player was playing that game was even remotely thinking about Cisse. Absolute tripe.

This latest senseless rubbish about 'we actually did play 4-3-3' is beyond belief. But why would he say it? Why does he feel the necessity to lie? If he did play 4-4-1-1 (which we all know he did) then just say it. Just explain why you did it. You obviously believe it was the best system to play, so just explain it. Why do you have to lie? Are you in denial? It doesn't make any sense. Alan, if somehow you are reading this please for the love of God listen, if you want to play the 4-3-3 from last season...THEN DO IT! Its what we all want. Its what the players want. If it's what you want, then just do it.

I can't believe Alan Pardew is able to get away with what he says and does, but he does. I could go back into the archives from last season and drag up more examples of his tripe excuses but I cant be bothered. What's the point? It seems Alan Pardew can say whatever he likes and people just accept it or just blatantly ignore it.

You have a gift Alan. Its the only one I can see at the moment, so don't lose it whatever you do.

Keep the tripe coming. It's fascinating.