Newcastle signing up winger for £6 million - but is he good enough? 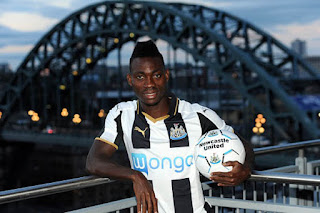 It looks like Newcastle are taking up the option to sign Christian Atsu on a permanent basis from
Chelsea for around £6 million. The infamous 'Sky sources' are all over the story claiming the club and Atsu are in negotiations today as the deadline from his loan clause to make his move permanent is closing in. Atsu has been decent overall in the Championship but is he good enough for the Premier League?

Well if you look at his record for Ghana this season he has become arguably their most influential attacker and his impressive performances helped Ghana to the semi-finals of the African Cup of Nations.


In the Championship for the Magpies he has put in some decent performances and some memorable moments on our way back to the Premier League. None more so than the free kick that finished off Cardiff in the penultimate game of the season - what a beauty!

His fee of £6 million is worth the punt for someone who obviously has talent but has never had a club yet to call home, as he has been continuously shipped out on loan all across Europe. We might just be able to get the best out of him next season.